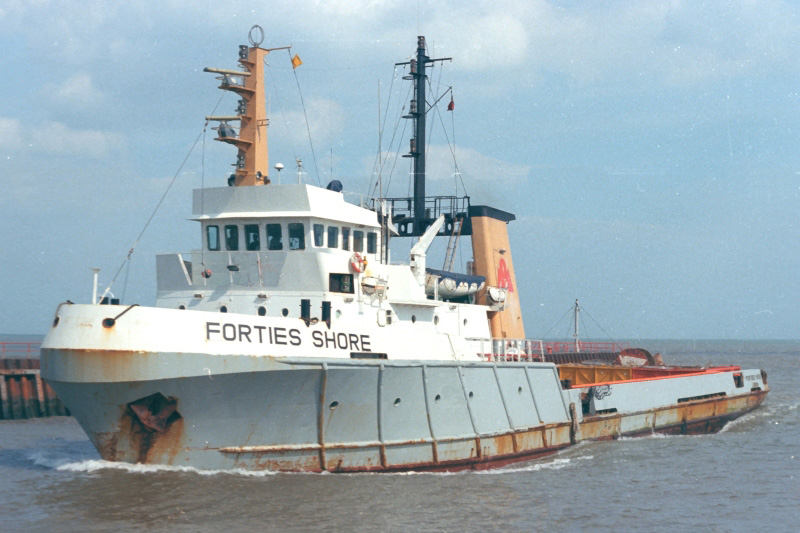 Had an extended leave after my last ship so that I could prepare for and pass my 1st Mate’s certificate. I joined the Forties Shore in Esjberg, Denmark on 1st September 1975. This was a big step up for me from the company’s smallest ship up to one of their new anchor handlers.

Things went well and Esjberg was a pleasant enough port to work from. When my crew change was imminent so was a rig shift to the UK sector. The company had decided to send out a film crew to film the rig shift to make a training movie for new employees. So we had a director, camera man and sound engineer on board and a marine superintendent on the rig co-ordinating.

My relief would be coming out on a helicopter, according to the superintendent, but I would have to leave on another one a few minutes before my relief arrived. I left the ship, on 13-11-1975, in charge of the mate and duly transferred to the oil rig and left on the designated helicopter only to arrive an hour later in Esjberg airport to find my relief sitting there. Evidentially his flight had been cancelled but had to be reinstated to get him out to the ship.

For the film see ‘Forties Shore Go Ahead’

I got a lift on the oil company crew change plane to Aberdeen, stopped in a hotel and got a flight to Norwich in the morning.

The company later added an addition to its standing orders to Masters about never leaving the ship until your relief was on board, despite if you are told differently from a local superintendent.

Some years later I actually watch the training film.