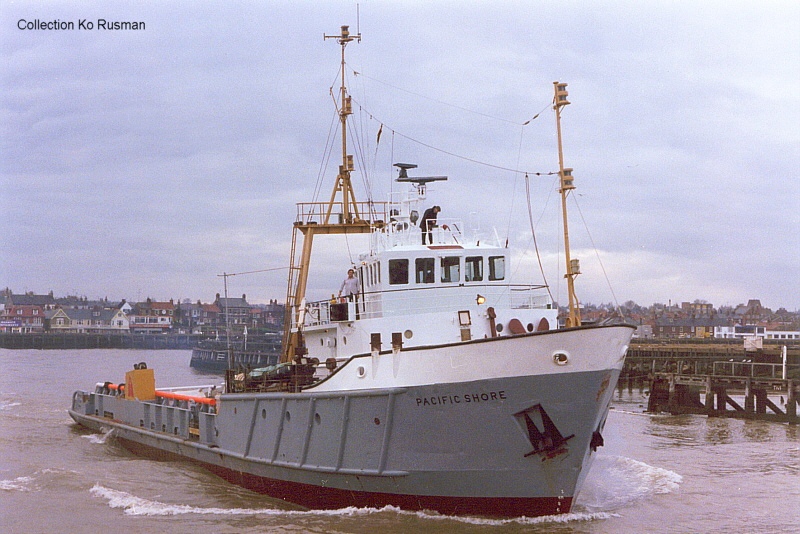 Excited starting off in a new industry and flying out to Halifax in Nova Scotia to join the Pacific Shore. Base port was Mulgrave but the ship was at sea so sailed as passenger on another ship, transferred by helicopter from one oil rig to another and duel arrived on the Pacific Shore on 08-07-1970.

This was all rather exciting and one of my first jobs was to slice an eye in a broken tow wire which was just as well as a few days later we were involved in towing a Canadian war ship of a sand bank and later receiving salvage money.

The Captain and Mate were not early risers and when out at the rig on standby the ship would anchor when not alongside the rig. It was a requirement to inspect all the anchor buoys first thing in the morning so I was designated by the Captain to call the C/Eng then heave up the anchor, check the buoys then return to anchor before he bothered to show up on the bridge.

Based in Mulgrave on the Canso Strait between Nova Scotia and Cape Breton Island is was all quite enjoyable and so much different to being on large cargo ships. Nights ashore meant visits to the Canadian Legion amongst others. We would buy drinks for the old barman and when he was off guard we would turn back the hands on the clock to get an extra hour in the bar.

Buying moonshine, car getting skunked, men only bars and visits to Antigonish speedway are memories of Nova Scotia. Time passed quickly and I left the ship on 09-11-1970.

The ship was preparing for a rig shift which I can only remember as being hard work as the Captain had broken an anchor pennant and it took us hours to clear it from the winch. Before that we had to bunker the tug that was towing the rig and pass over food supplies, all in bad weather. Can’t remember much else but left the ship on 31-01-1974.

Another visit to the Pacific Shore which was taken up the river Yare from Great Yarmouth to Norwich for layup and repairs along with the Nova Shore. I was given the job to look after the ships, partly because I lived locally and also because I was between homes and needed to be around to support my wife until we moved into the new house. So in the meantime the company kindly paid for me to live in a hotel and look after the ships. So I was signed on the Pacific Shore from 4-10-1977 to 4-11-1977. After leave I returned to my regular ship the Cromarty Shore.

[…] So it was back to the Petrel Shore again but only for three days before the Marine Superintendent came calling for me. The next day i was on my way to the Pacific Shore. […]

Was 2nd on this during 74-75 out of Yarmouth. It was such a heap we knew it as the Pathetic Shore. On one occasion we brought it back to port from Ekofisk on one engine, no radar, hand steering and not much else (the heating never did work and it was always freezing when off watch). But I also remember it was a brilliant sea boat and took everything the N Sea could throw at it. Lost 8 ropes during a rig visit in a force 9 and a rig crewman was killed when our final rope snapped and the rope broke his neck as it sprung round the rig leg he was standing by. I witnessed that. After the event I remember the old man commenting that he’d radioed the rig 3 times about the danger the man was in but the rig didn’t respond and/or the rig man ignored it. At that point we pulled away. I moved to the Bass Shore after some leave and that jumped if there was so much as a ripple on the water. Built for Aussie waters which is much flatter most of the time as I recall.
Oh, and I’d like to post the photo of the Pathetic on G+, is there any copyright problems that I should be aware of?

Hi. I worked on the Pacific Shore in Canada and N.Sea but never remember it being in such poor condition. If you found the photo online then be careful as it belongs to someone else!