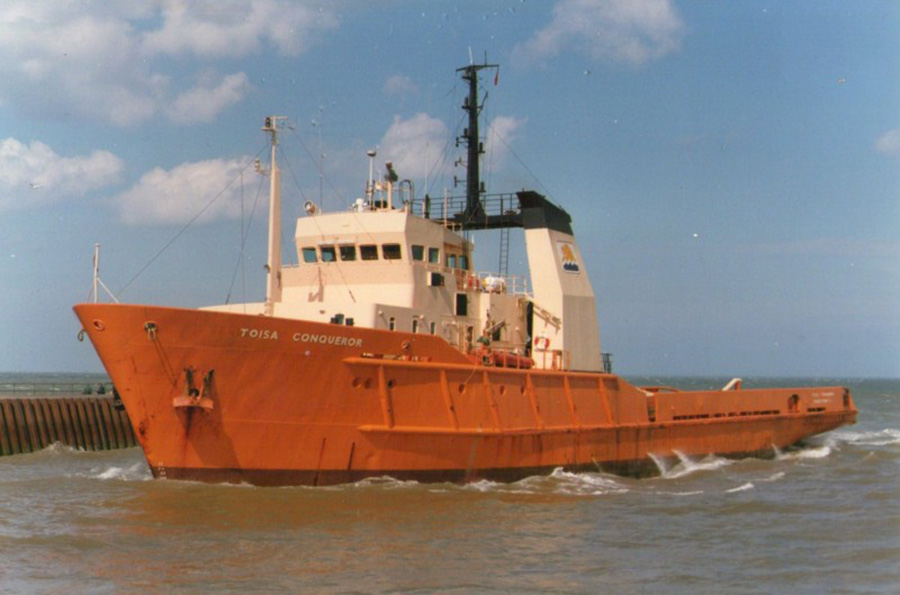 Toisa Conqueror was originally built as the Seaforth Conqueror, then became the Boa Conqueror before joining the Sealion fleet. She spent most of her years in the North Sea.

I joined in Aracaju, Brazil on 28-09-1997 and completed seven tours finally leaving 27-07-1999 when I in fact left Sealion Shipping as well. It was hard having a wife living in Indonesia, children in the UK and working in Brazil so I had to find employment in SE Asia to avoid all the travelling.

was based in Aracaju in Brazil but was the main anchor handler and tug covering the coastline from Fortaleza to Salvador but mostly in the Aracaju area. When I say Aracaju the berth was at the end of a long jetty for loading bulk carriers about eight miles north of Aracaju. Occasionally visited other ports such as Maceio, Fortaleza, Recife and Salvador but that was a treat.

Only social life was a night in a hotel in Aracaju before joining the ship or if we were really lucky a night or two in Rio on the way back to the UK.

Life was not too difficult, mostly supply work but rig shifts, supporting and shifting a crane barge and chain and anchor work for tanker moorings as well. The C/Eng was Don Gott, the motorman was Indonesian and the rest of the crew was local.

Surprisingly the weather offshore Brazil was not so good. Winds were often around force 5-6 making some work difficult.

The Toisa Conqueror went to scrap in Mexico not too long after I sailed on her,

Hey bruce its me alex

Um im wondering what year was the last time you saw the toisa conqueror.

Hi, not sure if we have talked before as I lost all the comments and data from this site some months ago and am now re-writing it. Last saw Conqueror and it was scrapped in Mexico in 2000.

hey bruce a while back i told you that my dad is build a model of the Conqueror i have some photos so if you would like to message me at lopezmodels@gmail.com so i can send u the photos of the build she is 1/48 scale