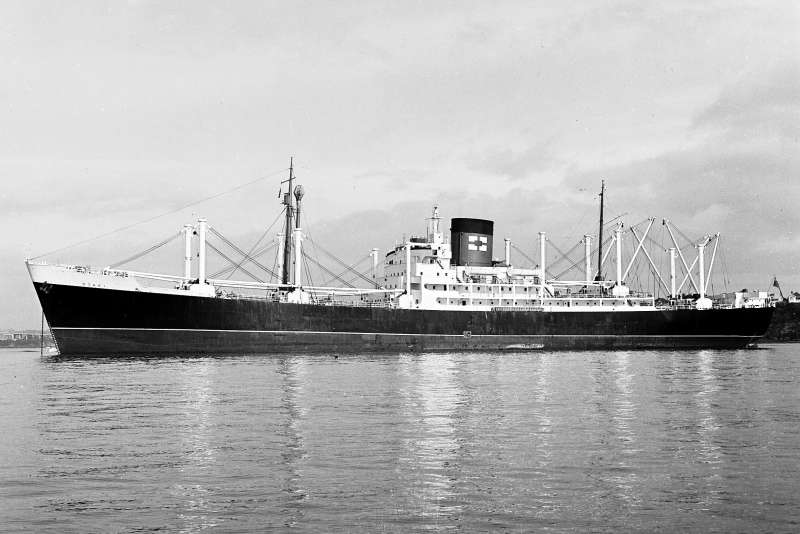 Signed on articles at the Royal Docks on 09-10-1967. Before we sailed the ship underwent engine trials and an engine explosion ensued resulting in some engine room staff being taken to hospital by ambulance. I had popped ashore after the trials were complete to buy an evening newspaper and when I returned on board there were engineers laying on top of the hatch waiting to be taken away.

We were bound for Melbourne but on the way stopped in Cape Town for spare parts with no shore leave. Stayed for a few days in Melbourne where there was a heat wave then on to Sydney for Christmas.

Looking forwards to visiting the famous seaman’s bar, Montgomery’s Hotel and as we were berthed in Pyrmont it was no trouble getting there. A good time had by all.

On to Brisbane for New Year and last port of discharge was Townsville. Here the crew were employed on shore side rates of pay preparing the holds for loading in New Zealand.

On arrival in Nelson I had money to burn in my pocket but got a call from my friend Chris Watkins to ask if I could be his best man at forth coming wedding in Lyttelton. So borrowing a suit and some shoes I made my way to Lyttelton and after the wedding I caught up with the ship in New Plymouth. I enjoyed myself there but after ten days we sailed to Lyttelton for four days more loading before sailing for London via Panama.

Arrived in Hull then on to London after completing a circumnavigation of the world and paid off on 20-03-1968.

When I was on the Otaki I am sure that she still had the NZSC yellow funnel but around that time she was transferred internally to Federal Steam and changed to their funnel as in the above photo. I have included another photo of her in the NZSC livery. 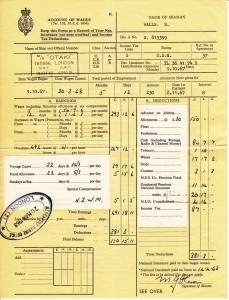 My dad was chief engineer on mv otaki, can’t remember dates. I am looking for a postcard or photo to make into picture for framing. He is 80 next month and spent quite a few voyages on otaki, it has special meaning to him. Can anyone help. Thanks

Type mv Otaki into Google and then select images.

Hi Bruce, hope you are well. I loved your trip down memory lane, I sailed with you on both the Rangitoto and the Otaki, I remember going horse riding in Brisbane on new years day and couldn’t sit down properly for a week after, I have a photo of us ashore in Melbourne with Nicky and Peter Dunn the Irish boys. Hope you remember me.I also saw George ball’s in one of the photos, he was a character, I also recognize the name Dave Carver.
Kind regard
Roddy Martin

Hi Roddy. Thanks for contacting me, I certainly remember your name if not your face and can remember the horse riding. It would be great if you could send me a scan of the photo and I could publish it on the site. Yes I remember the Dunn brothers and Dave Carver I met him again when I was mate on a supply ship in Great Yarmouth. One of his relatives contacted me on this site previously.
I hope that you had a good career at sea and have been successful at what ever you have done since. I look forward to hearing from you again.